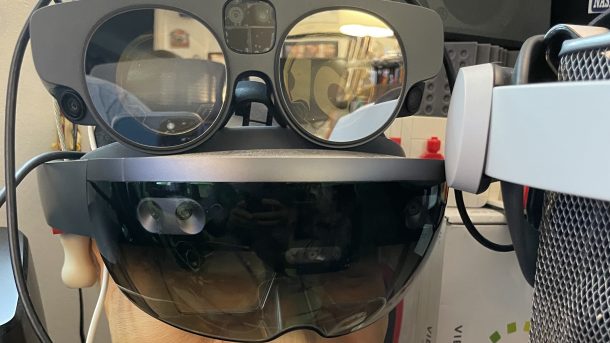 Two weeks ago, we had a lot of news from big names such as Meta, Microsoft, and Accenture about The Future of Work. What does this mean? Why should we care? Is this for real or just a pipe dream? How can I try it?

I will admit that I was a little surprised seeing Microsoft’s Satya Nadella present alongside Mark Zuckerberg during Meta’s Connect keynote. Are they not competitors? No, not necessarily. In fact, they may need each other right now.

Virtual reality (VR)—and now augmented reality (AR), mixed reality (MR), and the all-encompassing extended reality (XR)—has traditionally been sold as a consumer and gaming platform to the general public. Back in 2016, Oculus and HTC took the world by storm with their Rift and Vive platforms, game stores, and lots of hype.

The reality has been, as with many technologies, making money has been tough. Companies realize that to make a substantial profit and solidify their place in the market, a switch to business users is necessary.

Microsoft came out with its groundbreaking HoloLens back in 2016. It was revolutionary at the time—no AR device like this had been commercialized before. Yet this revolutionary platform has had a tougher time breaking into the mainstream. Microsoft first tried to make it a consumer device and quickly switched to business and enterprise. Magic Leap also tried going after the consumer market when it finally released its Magic Leap One in 2018. Two years and barely any sales later, they also pivoted to enterprise. Just like Microsoft.

With the big news from Meta this week Microsoft’s own foray into “mixed reality” is taking another turn. Maybe building a futuristic headset that costs way more than a standard laptop is not going to work right now. And I really like the HoloLens. Alternatively, partnering with another company that can create a more affordable device might have better results in the short term. Long term tech can keep brewing in the background.

What does this mean?

The concept of The Future of Work has many meanings. We have moved from typewriters and phones to word processers and fax machines, then to Microsoft Word and the internet. We went from emailing documents to sharing them in Google Docs or SharePoint. Now we can co-edit documents from anywhere at any time and have hybrid meetings in Zoom and Microsoft Teams. Work is not just reserved for the office anymore.

The Future of Work is a continuation of this evolution. From the static web 1.0 to the interactive web 2.0, the next generation of the internet will include a 3D element that is even more interactive. We have seen it in multiplayer gaming for decades and even work platforms like Second Life. Now we are at a point where the hardware, processing, internet speeds, and needs have evolved enough to make a spatial web possible.

Many of us see the potential of 3D and spatial as part of that future. You can call this the metaverse, virtual worlds, or whatever. The interaction that is possible using 3D opens up more use cases that were not possible before. This will happen in VR and AR. In fact, the augmented future may be the bigger winner. The combination of VR for remote and AR for in person can really be powerful.

Why should we care?

This is a good question. For many of us, there is nothing to do right now. This may be months or years away from affecting you. However, if you want to be a part of learning and shaping and participating in the process of discovery, the time is now.

Using the metaverse or 3D worlds for work may not make any sense for use cases like standard meetings, presentations, or collaboration. However, more specific uses like brainstorming, product development and review, social, demonstrations, and content creation have more immediate utility. The kinds of things that are enhanced by in person meetings but for when in person is not possible.

You can even enhance in person meetings with 3D content. Microsoft showed some of this with the HoloLens. Meta’s Quest Pro shows promise to make that more available to a wider audience at lower cost and with more utility.

Is this for real or just a pipe dream?

The technology exists right now for all of this to happen: Virtual worlds, cloud services, XR headsets, and people able to bring it all together. The barriers are expertise, costs, user experience needs, processing power, and mindset. Mindset may be most important: most of this is not ready for prime time. You must have an open mind and be able to accept failure. That does not mean the future is worthless. It just means try something else. Focus on the needs.

How can I try it?

Very easily. In fact, you do not even need a VR or AR headset. You can head over to Mozilla Hubs or Spatial and jump into a virtual world in your web browser within minutes. Or check out VRchat or AltSpaceVR for more of a social experience. These communities are exploring the future for us. You can also be a part of that future.

On its surface, the Meta keynote may not have been exciting to the general public and those deep into VR gaming. Yet it signals a shift in the industry. Gaming and social may have built up the industry and shown us what is possible, but business will fund the industry to the next level. This is not bad, it is not wrong, and is not atypical. Technology starts on the consumer side and once it has matured will transfer over to the workplace. I welcome our XR overlords.