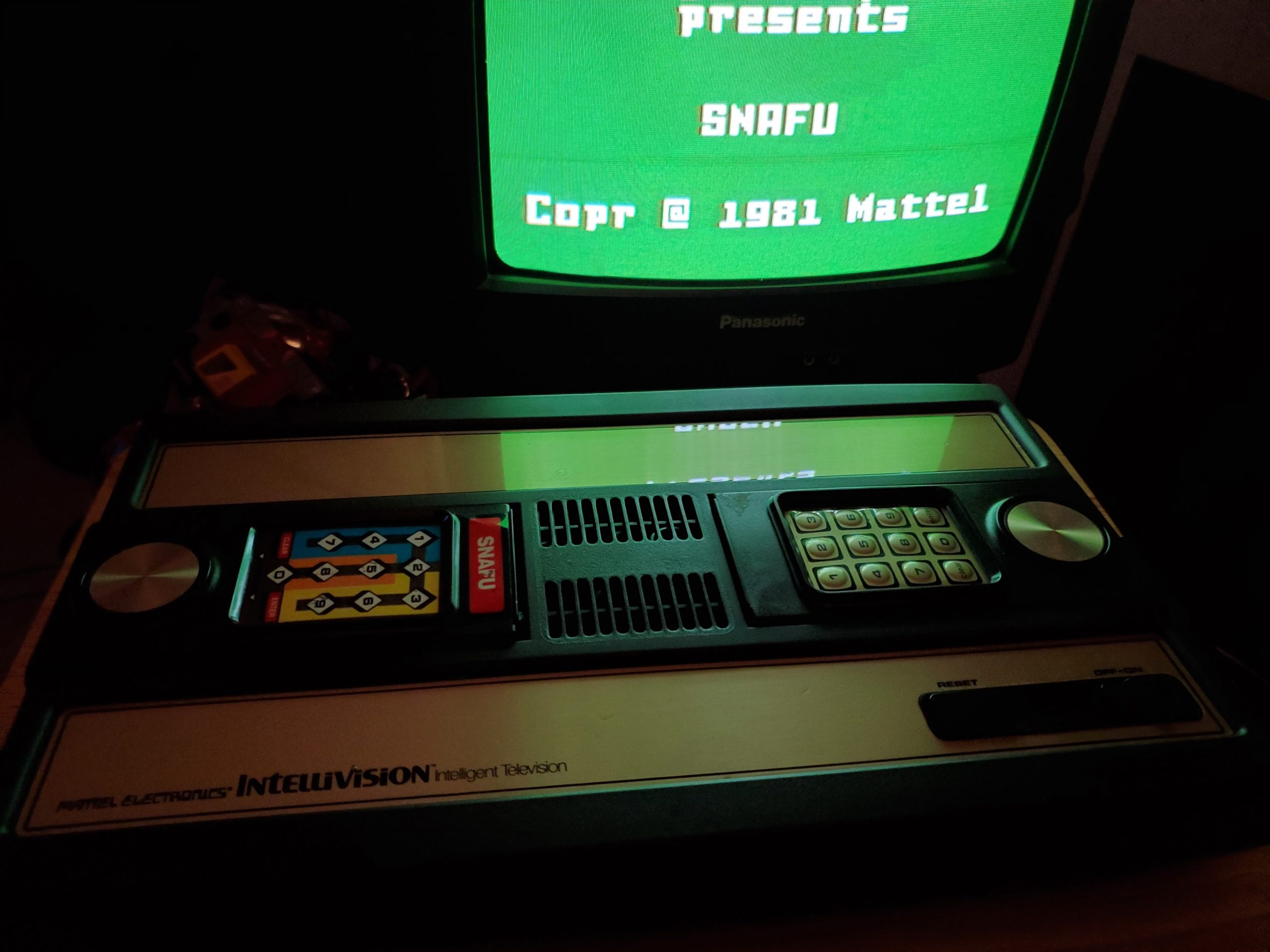 The Mattel Electronics “Intelligent Television” console, or Intellivision, debuted in 1979 amid a market of heavy hitters like Atari but well before Nintendo hit the scene. My family bought one around 1981 or 1982. None of us can remember the exact date. I do remember playing hours and hours of Intellivision down in my parents’ basement in the 1980s.

We also got a Tomy Tutor around this time, which was a much lesser known competitor to the Commodore 64 with its keyboard and cassette tape recorder. At one point we attempted a purchase of a ColecoVision but my dad ended up returning it for some reason. A little bit of trivia: Coleco was the “Connecticut Leather Company” but ended up making handheld games, Pong units (Coleco Telstar, which I still have), and ColecoVision.

The ColecoVision and Tomy Tutor are long gone, but my dad dug up the Intellivision in my parents’ basement recently so I had to get it working again.

Video games used to be much simpler

Back in my day you were lucky to have a video game with more than a few colors and realistic sound. Video game arcades were picking up, and mechanical games like pinball were still around. The competition in the home market was Atari and Commodore. The home personal computers like the IBM PC and Apple II were out there too, but a lot more expensive.

The Intellivision came at the height of the first home video game market and before the big crash of 1983. It has a 16 color palette, a 16-bit processor, a good library of games, boasted a speech synthesizer module—Intellivoice—that added realistic sounds, and had George Plimpton as a spokesperson.

Competition changed it all

While we had the Intellivision console throughout the 1980s, the advent of the Nintendo Entertainment System in 1986 really changed the landscape of home gaming. We jumped on the bandwagon too, and I have the numerous Nintendo consoles to show for it.

I still played Intellivision, but years of abuse to the console had taken its toll on the electronics. I remember taking apart the controllers at the time trying to figure out why some buttons stopped working. Was it my heavy abuse that did them in?

At the time I thought the circuit matrix inserts that were the issue, so I wrote to INTV to ask for new ones. INTV was the spinoff of Mattel that produced a new Intellivision III in the later 1980s before going defunct in 1990. Unfortunately, the inserts they sent were for the Intellivision III and were similar but did not quite match. The Intellivision went into a box in my parents’ basement to be forgotten for a few decades.

The Intellivision is alive!

When my dad found the old Intellivision recently, I had to attempt a repair. I forgot about the incompatibility of circuit matrix inserts so I tinkered with them to no avail. I kept digging by taking the entire console apart, something that had probably not been done since it was manufactured in the early 1980s.

The inside of this thing was pristine, apart from some dust and crumbs. What I determine after some trial and error was this: the issue was never the circuit matrix inserts, it was the cable for controller 1.

I quick switch of the cables—only requiring a few screws and a little elbow grease to pull them off the pins—and the Intellivision was working again. First game was aptly SNAFU.

Did you know there are still parts for the Intellivision out there? There is even a company in California that used to supply parts after INTV closed in the 1990s and they still have parts today. So, of course, I’m looking to make some repairs.

It is not because I need to play 40-year-old games. It’s not even that I need to show my kids what the 1980s look like. It is because it exists and I am a sucker for fixing things. I am also a sucker for history and remembering where we came from. So oddly for Intellivision, a footnote in the annals of video game history, you will be remembered.